Lucifer's Bride (Married to the Devil #1) by Roxie Ray and Skye Wilson is a difficult book to review. It's camp and just plain silly in parts but also sexy as... well, Hell. 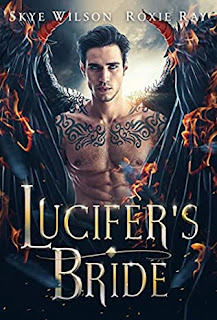 This is one of those chocolate chip books--you know the ones that don't have as much substance as whole cookies but are tasty treats in a pinch? That's where the problem in writing a review lies. Who couldn't eat a whole damn bag of chocolate chips by themselves, right? Yummy, sure, but you're still missing out.

Let's get one thing out of the way before we dive into Lucifer's Bride. There are a lot of cunts, cocks, dripping, and throbbing! If that kind of thing offends you, maybe find another book.

Luckily, I'm not that easily offended...

I enjoyed the romance, it was entertaining, the sex was great, and the characters were likable. It didn't dawdle. These are all things to recommend Lucifer's Bride. It's a fun book. Read it.

Now, I'm going to say something that's going to come across as bitchy but isn't intended that way. Although Lucifer's Bride was good, it never lived up to its potential. (Gawd. I know, I know. I was training to become a teacher and sometimes it shows.) I would have traded some of the hot, intense sex for any of the following:

1. More internal struggle from Luke. Dude. Your girl dies every time you meet her again. Rather than swaggering your way through each encounter, wouldn't it eat you up inside? (LJ Smith's Soulmate did a better job with that and no one ever got neked.) If he loved her that much, would he rush to get her killed again? Show us some angst to prove he actually cares.

2. Evie fighting harder against the whole you-must-obey-me-thing. A modern woman ought to have railed against that kind of command, especially an educated one, like Evie's supposed to be. It would have created more conflict and made the story more exciting. Instead, she just comes across as kind of weak-willed.

4. Luke losing his mind, trying to keep from corrupting his sweet, innocent wife (because hello, The Devil, the drive to corrupt and destroy is as ingrained in him as a Kardashian's need to be in front of a camera)--but ultimately realizing that she's just as freaky and naughty as he is. Maybe more so. She's freaking Lilith, after all. Mother of demons? The Bible's original bad girl? Oh, she's totally worse than he is.

The narrative touched on that one in passing but didn't develop it, which was a damned shame.

Anyway, so... my verdict is good, but not as good as it should have been. There's one last thing that lets Lucifer's Bride down, something I'm seeing so much of lately that it's become a personal pet peeve: the nice, happy ending, even though absolutely nothing has been resolved (and no real attempt has been made to resolve it,) just for the sake of a sequel. Stop. Doing. That.

Fellow authors, I beg you to please, please, please stop ruining a decent story by stretching it out unnecessarily to sell more books. Write a solid, complete story, then publish it. Let it stand alone. When did endless sequels--often featuring every single side character they can squeeze in (Yes, I'm expecting every one of Evie's friends and every demon they love to get their own books. Groan.)--become the norm? Can we make it... I dunno... not?

Okay, sorry, that was bitchy. Pet peeve. Moving on...

I enjoyed Lucifer's Bride and would probably have finished it in a single sitting if I didn't have the attention span of a gnat with ADHD. (Yay, Team Mental Illness.) It's fun enough to make up for what it lacks. Is that enough to make me go looking for the sequel when it's released?

No, because I don't see any of the issues I had with Lucifer's Bride being resolved in a second book. If I'm wrong and you're reading this after the fact, let me know and I'll... Well, I probably won't. Honestly, unless the first book in a series blows me away, I rarely bother with sequels anymore. I would read more from these authors, though (as long as it's not flogging the whole Hell thing to death.)