I know they say not to trust a book by its cover but I always assumed they meant the... you know, picture, not the blurb. When I read the description for Keri Lake's Master of Salt & Bones, I mistakenly took it a little too literally and was expecting actual curses and monsters.

I've been on a fantasy kick lately. Guess I can't shake it. But the cover was just so pretty and magical and... 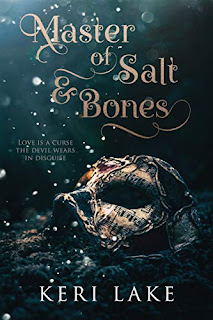 There aren't any merfolk or sirens in Master of Salt & Bones (honestly, I don't know why I thought there would be) and no knights or literal curses. It's surprisingly mundane and gritty. All realism here and no fantasy - and that's actually okay.

Although Master of Salt & Bones wasn't what I was expecting, I was captivated by the story from the start. It's told in a back-and-forth style that maintains a good pace as each chapter moves from local girl desperate to avoid the dreaded small town trap, Isadora, to filthy rich recluse, Lucian’s, points-of-view. It moves easily from past to present, revealing everything at just the right moment, with a plot that never stops turning. Happily, the surprise twist at the end actually came as a surprise (which is a nice freaking change for a jaded old bitch who lives and breathes horror.)

Master of Salt & Bones is, at its heart, a romance, but it's really  so much more than that. It deals with issues of mental health, childhood and sexual abuse, addiction, loss, secret societies, class divides, and the desperation that drives humans to their very lowest points.

It's no light read, that's for sure.

As someone who can, unfortunately, tick more than a few of those boxes, let me tell you that Master of Salt & Bones hits hard (and can be all kinds of triggering so be aware.) This is not a nice, happy romance that leaves you feeling all warm and fluffy at the end. It drags you through the gamut and leaves you to pull yourself to your feet all alone at the end, raw and a little weepy, but satisfied.

There really isn't a nice way to say it so I'll just put it out there: most of the characters in this book are fucked. Up. Surprisingly, they kind of... stay that way. Don't expect this massive healing journey because that is not what you're going to get from Master of Salt & Bones. What you will get is something more realistic: two characters who accept that they're fucked up but that they can make it work.