Until Friday Night by Abbi Glines is one of those books that, as an adult, you don’t expect to find on your TBR and certainly don’t expect to enjoy when you do. It came up in one of my daily book emails and I was just bored enough to give it a go. I’m glad I did because, although it is a big whopping pile of teen slush, I enjoyed it very much. 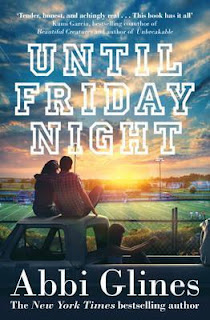 When I wasn’t being kicked in the feels.

Maggie and West are both damaged teens dealing with the worst home lives you can imagine. West is a star football player trying to hide his father’s terminal cancer from everyone around him while Maggie watched her father kill her mother. Through a friendship that helps Maggie find her voice and West face his grief, a deeper relationship is formed.

So... let’s talk about what doesn’t work. First of all, there are grammatical errors and typos that should never have made it past an editor. Secondly, the tenses get muddled in places. And, of course, I loath 1st person YA lit--but that’s just my own pet peeve. The biggest problem with Until Friday Night is the introduction of a minor character involved in an unresolved side plot. I suspect they were include for a sequel , since they served no purpose in the actual novel--a complete waste of page space.

Though it has its flaws, Until Friday Night is a powerful, sweet romance. It deals with sex maturely, in a way that fits the story. It also calls out abuse in relationships, which is important for young women to read. Glines also manages to give Maggie and West distinct voices, which can be difficult when you’ve got chapters switching between points-of-view. Finally, the backstory is well-placed, given at just the right time, without bogging the story down.

I was impressed with Until Friday Night (mostly because it had me crying like a baby--and without a vampire in sight!) It’s easy to read, in plain language that makes it accessible to all reading levels. Plus, it’s just darn cute.
Posted by Wondra at 12:35 No comments: