Back in 2008, Showmasters decided that they were going to try to set a World Record for most people in Star Wars costume. Well, as per usual for Showmasters, it was a complete shambles and they never even told us whether it was official or not (we assumed not) but it was still a lot of fun.

But the photo I've got for you today isn't from that attempt - though you can check out photos of me as a Jedi here. 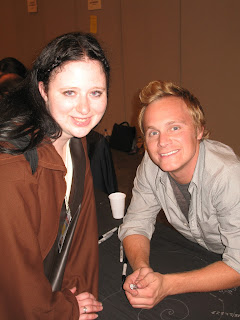 I'm really super excited about this photo because I had completely forgotten about meeting David Anders! I love/hate this guy in iZombie!

And, if you do want to see our Record attempt, you can have a gander at this video: