Honestly, I feel The Blue Lagoon (1980) hardly warrants the effort to write a review. I disliked it that much. No, that’s not right. I detested and was utterly disgusted by this movie. 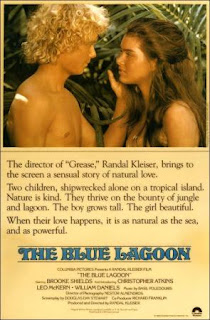 Jay tells me I sometimes lose objectivity when I do reviews. It’s something I try to keep an eye out for. This time, though, I’m going to put objectivity aside and lay into this POS.

The Blue Lagoon is nothing more than a paedophile’s wet dream. There is nothing about this movie that makes it redeemable to anyone else - not even Christopher Atkins, who you know I adore.

I understand that, in certain settings and to further a story line, there come times when a filmmaker might need to show naked children and/or children on inappropriate situations. This, of course, requires both a plot and a purpose - neither of which The Blue Lagoon possesses.

This is a nearly two-hour film that feels four. It drags, never getting to the point. It lingers on the children’s nudity unnecessarily and, yes, they do get it on. Even if the children weren’t meant to be cousins (eww), the age difference between the two main actors would be a cause for concern. Brook Shields wasn’t of age at the time of filming but Christopher Atkins was.

Gee, I guess The Blue Lagoon really has it all.

And don’t even get me started on that stupid, pointless, infuriating ending. I’ve seen a lot - a LOT - of bad movies but I’ve never seen anything that was a bigger waste of my time than The Blue Lagoon.
Posted by Wondra at 16:39