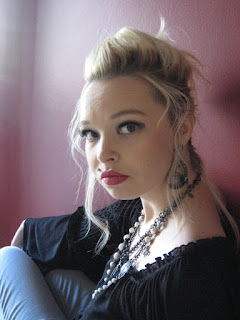 Chasity Tarantino currently resides in Highland, Indiana. Reading has always been a huge passion of hers. There is nothing better than being able to escape reality for a little while and delve into a new world created just for entertainment to her. To her books are golden and they are the most magical thing in this world. She began writing when she was in the fourth grade and has been writing ever since. She is currently attending Ashford University to complete her BA in English. When she is not reading or writing is listening to music, crocheting, or hanging out with her family. She lives with her husband and her doggie Chloe, she considers herself the luckiest girl in the world to have those two who constantly support her and a loving family who have always had her back. Her first published work was a short story named “You’re Still the One” which was featured in an Anthology called, “My Life Would Suck Without You” and her upcoming debut novel, “Warped Love” will be her first full length novel.

Except from Warped Love:

Finally after much debate in his own mind, he got up and made his way to the bar.

The seat next to her was vacant so he took it and motioned to the bartender, letting him know that he needed a drink. He then glanced at the girl next to him, only to meet her gaze; she was looking right at him. She smiled; then quickly looked back at her drink.

He smirked, but she didn’t see it. She was even more beautiful up close. There was definitely no turning back now, he licked his lips and began to say something to her, but before he could get it out the bartender came over and said,

“Sure thing.” The bartender agreed, heading off to make his drink.

“Hi.” She muttered back quietly; then she quickly scanned the bar behind her.

Camden thought she looked nervous, maybe even scared. He wondered what that was all about, when she was finally convinced that the area around her was safe, she looked back at Camden.

“Having a good time at the party?” He questioned, even though she clearly was not.

“Yeah, I really like the band and this new album is really good too.” She nearly whispered, looking at her clutch.

So not only was she absolutely gorgeous, but she liked his music and she like it for the actual music, not him. This just  got better and better.

When he didn’t answer her she asked,

“What do you think of this band?”

He smiled widely at her.

“Well I think my opinion is a bit biased.”

She looked at him puzzled.

“I’m Camden, bassist of ‘Four Aces’.” He said, extending his hand out to her.

“Well then Camden, I’d say you are completely biased.” She agreed, shaking his hand.

Again she looked around her surroundings, before her attention went back to Camden.

“Something wrong?” He finally questioned.

“No, not at all.” She responded, but didn’t meet his gaze.

He just nodded; he didn’t believe her at all. He knew it had something to do with her boyfriend. This made Camden angry for some reason, he couldn’t pinpoint why though.

“Well thank you for coming out and supporting the new album.” Camden said appreciatively.

She smiled at him.

Her smile was breathtaking and he could feel it melting him completely to his core. The intense color of her eyes made him positive he could fall into them.  He knew in that moment that those piercing eyes would haunt him forever.

“So what do you…” Camden began, but he was interrupted by a man walking up to Jazlyn.

“Jazlyn let’s go, I’m done. So we are out of here.” The guy that the voice belonged to grabbed Jazlyn by the arm; Camden could see that it was her boyfriend.

Jazlyn’s whole demeanor changed, she looked at the floor. Her shoulders sagged, she grabbed her purse; she looked like a scolded child.

The boyfriend looked back at Camden and gave him a look that said, ‘MINE!’

Then he quickly walked off dragging Jazlyn behind him. Camden watched the pair with a sinking feeling in his stomach. There was something seriously wrong with that relationship, but what could he do about it?
Posted by Wondra at 11:16