Uncertain of his sister's fate, a boy enters Limbo.

Limbo is a monochromatic platform game from independent studio Playdead. Over 39 seamless chapters, Limbo follows an unnamed boy through, well, Limbo as he searches for his sister.

Your character, The Boy, faces a series of puzzles that grow increasingly difficult as the game progresses. The puzzles are fairly easy for the first half of the game, which leaves you to focus on the stark beauty of Limbo's graphics.

This is one dark game, but in a creepy-cute way. It's all shillouette and misty shadow. The Boy's journey through Limbo begins when he wakes in the forest to makes his way across the spider infested land, ocassionally chased by Lord of the Flies-esque children in masks. 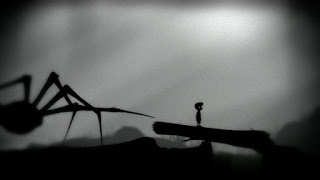 As the game moves from pastoral to industrial, the puzzles get more difficult. In some cases, too difficult. The last ten chapters or so infuriated me because your timing and spacing have to be exactly spot on solve the puzzles. 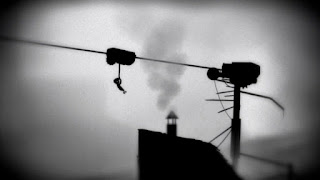 Knowing how to solve the puzzle means nothing if, say, you place a box a hair's breadth too far forward. I died at least twenty times in a row trying to complete the last few chapters. Limbo's deaths, I have to admit, are pretty cool. Very... inventive. Still, dying a bazillion times kind of sucks the joy out of the game. 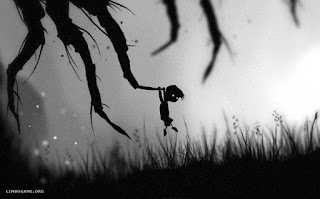 Limbo was greeted with rave reviews when it came out in 2010. I don't necessarily agree with all of them because of how frustrated I was by the end. It starts a lot better than it ends. And, speaking of the end...

The payoff was not proportional to the effort required to get there. It was ambiguous at best and left many players, like myself, wondering WTF? Theories about Limbo's abrupt ending abounded on the internet but most of them agree that The Boy at least finds his sister. Everything after that is up to your imagination.

Although the second half of Limbo was too difficult to really enjoy, I have to recommend it if, you know, you live in a cave and haven't gotten around to it yet (Hey, I'm broke, y'all and I had to wait until I could get it cheap.) for the eerie atmosphere and creepy graphics.

Played Limbo? Let me know what you thought.
Posted by Wondra at 15:00