When I asked Jay why he thought I should watch The Deep (1977), he said, "There seemed to be a glut of maritime movies at the time The Deep was released. They were all very similar -- but not this one. The Deep is a proper action film. You can think of it as a predecessor to the likes of Indiana Jones." 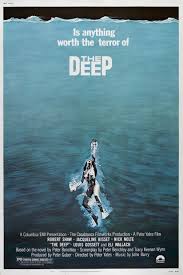 I didn't know that The Deep was an adaptation of a Peter Benchley novel. Totally not surprised, though. It has that feel. The Deep came two years after Jaws but is just about as forgotten as Jaws is remembered.

Although The Deep isn't really a horror movie, there are some quite creepy moments. There's a particularly effective one at the beginning, when something grabs Gail Berke's (Jacqueline Bisset) leg and tries to drag her under a shipwreck. It gave me high hopes for the movie.

It probably shouldn't have.

Just a few minutes into the film and I was pissed off. Berke and her boyfriend, Nick Nolte's David Sanders, are both supposed to be compitent divers but (of course) Berke freaks out and has to be saved from herself. Does that sound like sarcasm? You mean because women always have to be saved from themselves by men? Gee, of course not!

This is going to be the dominant theme of this review so, if you have some kind of issue with feminist rants, you should probably go ahead and leave now.

As if to prove my point, this was about the time that Jay said, "You know, the whole movie was sold on Jacqueline Bisset in that clingy white top but this is the most you see of it." 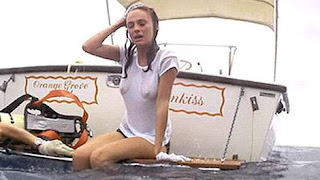 That might be why I was kind of preoccupied by watching what they dressed Bisset in through the film. Every single outfit she wore, except one, was white. Even that one was a pale yellow. Maybe that was a coincidence... or maybe they were trying to use the white to suggest some kind of feminine purity bullshit?

I'm gonna be straight up with you here. There's a very good possibility that I didn't give The Deep a fair chance because I was already pissed off about the damsel-in-distress crap. Or, you know, the patriarchy in general. What I'm trying to say is that I know this review is totally biased and sorry, not sorry.

The reason I'm explaining this now is that I'm going to spend some time bitching about Sanders. I freaking hated his character so much. Sanders and his girlfriend, Berke, are supposed to be on holiday together when they come across this wreck (that they weren't supposed to be anywhere near, anyway.) He becomes obsessed with it, even though she repeatedly asks him to forget about it -- which is really all you need to know about his character.

Sanders says it himself, "I feel things so I do them!" Basically, he's a selfish ass who does what he wants and screw the consequences. He shows no empathy. He isn't considerate or even polite. There is absolutely nothing likeable about Nolte's character. Part of the reason for that, I think, is the fact that there's no backstory. I'm guessing they skimped on the character development because the movie was already over two hours. (It really feels it, too.) They shouldn't have, though, because it's impossible to give a damn about whether Sanders is successful or not.

The little bit of character development that happens as the movie goes along is completely turned on its head later when Berke is attacked. (I say attacked... stripped naked -- surprise me -- and smeared with blood.) Suddenly, and without any explanation, their roles reverse. She's determined to stay and find the treasure while he's determined to take her to safety. Why? For the love of the gods, why?!

Do not change a character's behaviour without explaining it, dammit. 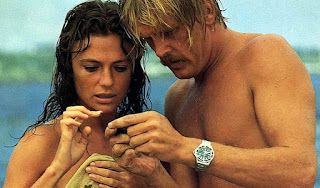 Okay, so here it is. You know that wreck that they found? Well, it's the wreck of a ship filled with weapons ready to go boom at any minute but holds a buttload of morphine that every crooked dude on the island wants to get their grubby mitts on. It also happens to be sitting on top of a much older wreck that's hiding massive amounts of treasure.

It's interesting that Sanders is hot for the treasure because everyone else just wants the morphine. There's an interesting social commentary there -- drugs are worth more than gold. The Deep shows how messed up our priorities can be.

Talk about priorities... Sanders almost dies at one point because his desire for the treasure is greater than his desire to breathe. It almost made me angry that he got what he wanted at the end. He was so annoying that, rather than not caring what happened to him, I actually wanted him to fail, just to knock him down a peg.

But I'm repeating myself. Let's look at what I did like about The Deep: Robert Shaw. I thought it was a nice touch to have Jaws's Robert Shaw in The Deep as the lighthouse keeper, Romer Treece. The crazy thing is that, even though it's two years later, Shaw looks younger in The Deep than he did in Jaws. If it hadn't been for that incredible voice of his, I might not have recognised him.

Shaw is The Deep's saving grace. He's a renegade because he just wants to do the right thing. Treece agrees to get the morphine from the wreck, to give Sanders a chance to find the real treasure, but he doesn't want to keep it for himself or allow the baddies to have it. His solution is pretty bad ass, too.

I'm going to let you in on one of my big fears. (There are a lot. I'm a wuss.) Underwater views scare the shit out of me. Seriously. I can't even handle it in video games. There's something about the murkiness, I think, that unsettles me. The Deep was good at creating underwater atmospheres that freaked me out.

Underwater, shapes are uneven and unclear. They could be anything. There are no clear lines. The filmography here is really effective because the camera moves with the current. It feels like you're there -- which isn't so great if there is scary as shit. I'm not joking, y'all. I nearly broke Jay's hand, I squeezed it so hard.


Do you have any idea how freaking scary moray eels are? Do you?! The way they move is sinister and those teeth! *shudder* Thanks for the nightmares, man.

The score to The Deep was done by the legend that was John Barry. It's so important to the film because, underwater, you've got that muffled sound. Although the silence is broken by bubbles and breathing, it would be too much without the score.

If we ignore the way Berke is constantly left behind to play the victim, the fact that they managed to get her naked three times, the fact that Sanders can't even answer a simple question like if he wants to marry his girlfriend, or the fact that the film's baddies are all black guys and voodoo is dismissed as "garbage" -- I'm asking you to overlook a lot here, I know -- The Deep isn't so bad. It's not great, but it's watchable.

Not that I'll be watching it again any time soon.