I've been thinking about this review for a long time and I don't feel like I'm any closer to knowing what I want to say than I was two months ago when I actually watched the film.

I even watched it a second time this week, to see if that would help and... nope. 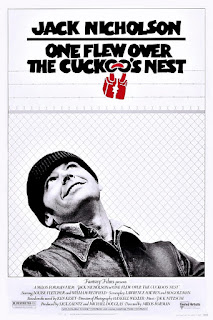 Let's face it: One Flew Over the Cuckoo's Nest (1975) is a fucking hard movie to review.

Even before you get to anything like plot, you're looking at a real who's who of the times. There are some heavy-hitters in this one, from Christopher Lloyd to Brad Dourif. Seriously, it took me about twenty minutes to realize I was looking at a young Danny Devito!

Jay says that One Flew Over the Cuckoo's Nest is "one of those must-see films that you never forget." I can't think of a better way to put it. I'll add, though, that you really need to be older to appreciate it. It's not an easy movie to watch, even though it's so engaging that it doesn't feel like the 2+ hour movie it is.

If you're not familiar with the movie, it follows Jack Nicholson's Randle McMurphy, who is transferred from prison to an institute to be evaluated for mental illness. Is he "insane"? The movie kind of leaves that up to you to decide. (Personally, I think he's the only sane person in the whole damned place.)

Most of what I want to say about One Flew Over the Cuckoo's Nest centres around McMurphy's nemisis, Louise Fletcher's Nurse Ratched. (I want to call her "Nurse Wretched" so badly.) She is one of the most hateful characters I have ever seen in a movie -- and she does it all with a serene smile on her face. (Jay calls her a "smiling assassin.")

Ratched's smug smile made me want to smack her face so badly it hurt. I hate her character so much! (There's a reason Ratched is on the list of worst film villains of all time.) She speaks in a quiet tone that she backs up with absolute certainty in her own self-importance. She thinks that she knows what's best for everyone -- at least that's how she wants to come across -- but, in reality, all she really knows is how to have an easy life. 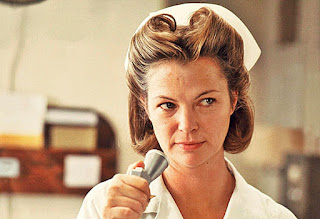 Just one example: the music Ratched plays is a way to muffle the uncomfortable sounds of the institute. A way to distance herself from the "madness" around her. When McMurphy asks her to turn it down, she rejects his request with a, "That music is for everyone." It's not, though, is it? That music, like everything else that happens under her watch, is for Nurse Ratched and Nurse Ratched alone.

Ratched doesn't do anything to help the patients understand their situations or put them at ease. McMurphy asks what the pills are that they've given him but she flat out refuses to answer. It's "just medicine," she tells him. "It's good for you." You'd be surprised how often people with mental illness hear this. It sucks every time. If Ratched had just taken the time to explain what the medication was, maybe things would have gone differently between her and McMurphy. But she didn't. And it didn't.

One of the things that people with mental illnesses suffer from (aside from those illnesses themseleves) is a sense of helplessness. They feel like they're never in control. Instead of trying to help change that, Ratched just plays on it, using it to her own ends. 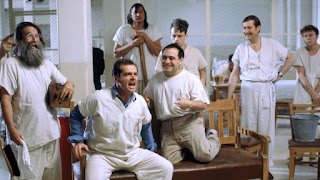 Then lose it again through Ratched.

One of the reasons One Flew Over the Cuckoo's Nest is so hard to watch is its tragic ending. McMurphy, rather than Ratched, was the one who could have saved many (if not all) the patients. But he couldn't even save himself from the nurse. Why was she so determined to silence McMurphy? Because he made her life inconvenient.

Jay and I discussed this movie at length. It's a heavy movie, with a lot happening. (Is this why you don't see it on telly very often? Because it's too much?) When I pointed out all the gambling that takes place in the institute, Jay said, "That's who McMurphy is. He's a gambler, a chancer. Face it, that's what One Flew Over the Cuckoo's Nest is, a con job gone wrong." 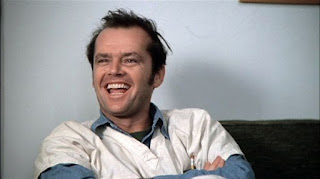 McMurphy isn't the only one in the institute masquerading as a nut. The enormous and silent Chief Bromden (Will Sampson) is McMurphy's friend, conspirator, and only true victory. Chief is there because he's hiding from himself, from what he could be. (It could be said that McMurphy is doing the same.) When Chief sees what's become of his friend -- what the real meaning of convenient is -- he makes his escape. And, in a way, gives McMurphy the only escape left open to him. It's both a heartbreaking and beautiful ending. 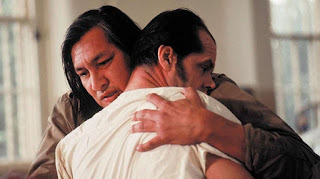 It has to be said that part of what makes One Flew Over the Cuckoo's Nest so relevent (and, let's be honest, painful) to me is my own struggle with mental illness. Asylums freak me the hell out -- mostly because it would be far too easy to find myself stuck inside one. Modern medicine and sensibilities mean that people in my situation are treated with more understanding and dignity than they ever were in the past.

And this movie was only made forty-three years ago.

Just thinking about that a minute. If I had been born forty-three years ago, would I have been stuck inside one of those places, fighting my own Nurse Ratched?

We've come so far. Unfortunately, if Trump's presidency has taught us anything, it's too damned easy to slide back again. So, you see, One Flew Over the Cuckoo's Nest isn't just drama for me. It's horror.

There's so much more that can be said about One Flew Over the Cuckoo's Nest (You'd be surprised how many different ways I can call Ratched a bitch.) but it's been said by more articulate people than me so I'll leave it there.

What are your thoughts on One Flew Over the Cuckoo's Nest? Be sure to drop me a comment and let me know. Also, if you have any suggestions for next year's must-watch list, let me know those, too.

Until next time, thanks for reading.
Posted by Wondra at 12:55