Yesterday, the hubs and I made our yearly visit to the coast to say farewell to summer. 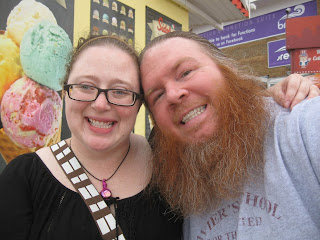 August 1st, Lughnasadh, marks the first harvest of the year and the start of fall. It's a transitional month, with some days that make you long for the beach and others that send you to the back of your closet where all the hoodies have been hiding for months. Today was one of the former.

It's been a scorching few days, which is not exactly happy time for Wondras. I have heat and light sensitive migraines and burn ridiculously easily in the sun. And that's not even mentioning the way humidity makes me resemble a poodle.

Jay's not much better - understandable, since he's about 25% shag pile.

But today was a bit cooler and we thought we could just about manage being outside for more than a few minutes so we grabbed some sunscreen (SPF 50, of course.) and went to the beach. 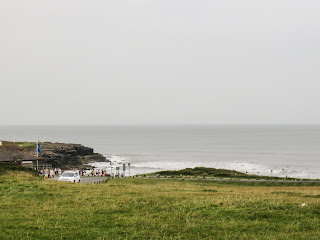 The beach was way too crowded for Anxiety Girl so we sat a bit away, feeding the birds and watching the surfers. Then, we headed up to the fayre. 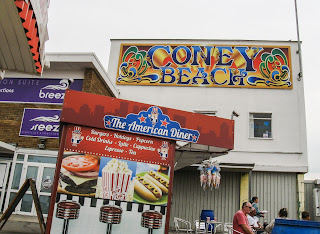 It was busy at the fayre. Busier than I've ever seen it. Even the fact that it occasionally sprinkled (this is Wales, after all) didn't lessen the crowd.

Jay and I got ice cream cones and sat on the edge of the beach. Can you tell why we didn't get any closer? 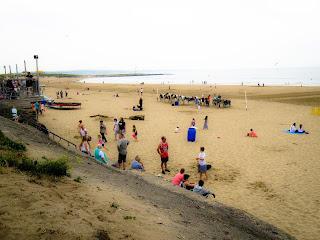 Yeah... I stay a good distance from anything that can kill me. From as far away as we were, all those horses and donkeys made my chest tight. No stretch of sand is worth dying for.

After we had our ice cream, we wandered through the fayre. Wednesdays are cheap days - rides are just a pound each - so most of the rides were busy. I love all the colors and lights and noises of the fayre. 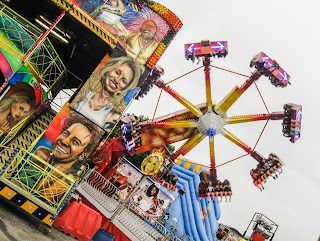 We played in the arcades for awhile then, which was great fun. Jay took on the claw machines again but they totally kicked his butt. There was a weird Pac-Man themed tipping point machine that we played for ages because it amused us. We won several pounds on that one. Unfortunately, we lost it all again because we were having so much fun.

On our way out, Jay suggested stopping for ice cream again and I couldn't think of a single reason to say no. So, we stopped to enjoy another ice cream cone. 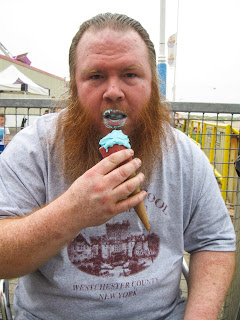 We normally stop at a local chip shop after we visit the fayre but, this time, we made a detour to go to Jay's favorite takeaway from when he was a kid. They do the only curry sauce that I like. Nom. 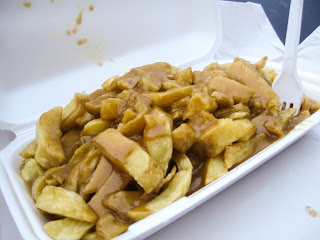 I really adore the seaside. It helps sooth my anxiety and the sound of the waves drown out my tinnitus. I wish that it wasn't nearly an hour's drive away so we could spend more time there.
Posted by Wondra at 11:14