Me: Lin Shaye isn't someone you'd expect to see on a list like this. She came onto the scene quite late in life - although she was in A Nightmare on Elm Street, back in 1984. 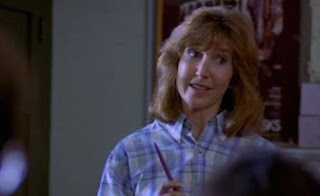 Jay: I honestly don't remember her in A Nightmare on Elm Street. It's really only in the last ten years I've become aware of her.

Me: I understand that. It feels like she came out of nowhere but she was always there.

With a career starting in 1975, Shaye has more acting credits than you'd think. Most of those appearances were nurses, teachers, and receptionists. Now, Shaye in the star. After all those years of not being noticed, she finally landed the lead role. At the age of- what year was Insidious?

Me: Right. So she became leading lady material at the age of 67. Did I do that math right?

Okay, the point is that Hollywood's a real dick when it comes to female actors. If you're not eighteen-years-old with a rack up to here, it doesn't want to know. How does an actor like Lin Shaye shatter that glass ceiling?

Jay: Like you say, Lin Shaye has been in loads of things. You see her, but you don't notice her. You don't know who she is. Kind of like Gerard Butler. You saw him in loads of things but you didn't really notice him until he did 300. Same with Lin Shaye. She was around for thirty years but it took Insidious to really get her noticed.

Me: What got her noticed?

Jay: Ability. It helps when you're actually good at your trade. And, yes, you're right. So many female actors drop out once their looks "fade" or they go off to have children. They never really come back because those eye candy roles are gone. The thing is, though, you'd always had older women in movies. The mum figure, the grandmother figure. It's the staying power, through all of those different roles, that sets Lin Shaye apart.

It's one of the big failings of Hollywood. They don't look after female actors. Lin Shaye isn't alone. Helen Mirren, Jodie Foster - they're the same. There are older female actors still out there, still doing really well. I think it's happening more and more and these days.

It happens with men, too, you know, maybe not on the same level. Look at Anthony Hopkins and Tobin Bell. It's hard for anyone over a certain age in Hollywood. That's something that needs to be addressed. It's her experience, her ability that made Shaye's continued presence in Hollywood possible. Someone who is always quality will always have a part.

Me: I think that's kind of the problem, the "mum" and "grandmother" roles. Older women aren't just either of those things. Older women are humans capable of incredible things. That's part of the reason I love Lin Shaye in the Insidious movies. She's the fighter, the hero. I think we need to stop treating older women in Hollywood like they've only got two options - and Lin Shaye is helping do that. 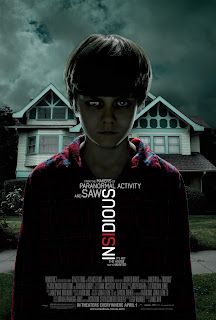 While we're on the topic, talk to me about the Insidious movies. You know they frighten the life out of me every time but I can't stop watching them. What are your thoughts on the franchise? Why do you like them?

And don't say you like them because they scare me!

Jay: Anything that frightens the shit out of you...

I'm so desensitised to horror movies - I think a lot of people are - so it's nice to have a movie that is spooky. I can't say the Insidious movies have given me sleepless nights, but they've jumped me, which is more than a lot do these days.

Shaye carries the Insidious movies. She's the linchpin. Everything that happens, happens through her. It's funny that they killed her off in the first one but she was such an integral part of it that they had to bring her back to keep it going. You know you did a good job when they have to find a way to bring you back to life to make the franchise work.

Me: At a time in her life when a lot of actors would be slowing down, Lin Shaye just seems to be gathering speed. She's got something like eight movies and a TV series coming. I think it's just great. We need to see more actors at advanced ages being recognised for their outstanding ability, rather than just treating them like has-beens - especially female actors, who seem to reach that age a LOT sooner than their male counterparts.

What do you think? Should Lin Shaye retire while she's still on top or keep killing it?

Jay: You know, she's probably looking at her past as having done okay. Now, she's doing a lot better than okay. As long as she's fit, why should she stop? If the demand is there, and her performance is still top-notch, which it is, keep at it. I mean... they don't expect men to stop. Look at Arnie. You'd never expect Stallone to stop, just because he's in his seventies.

Me: That was exactly what I was hoping you'd say. It's hot when you're woke.

Jay: It's just the truth. I hope Lin Shaye keeps going for a long time because I enjoy seeing her movies.

Me: I'm glad we already "did" Robert Englund because he and Lin Shaye appeared in the 2001 Maniacs movies together. We didn't really go into those films when we discussed Robert Englund. Maybe we could do that now?

Jay: Of course. I loved the first one but I wasn't as fussed on the second one. The guy who took over from Englund wasn't as good, I don't even remember who it was....

Jay: Was it really? Huh. Well, there you go.

They 2001 Maniacs movies aren't in the same league as the Insidious ones, but they're good pulp. They're entertaining. There are a lot of faces in those movies you know, even if you don't know their names. (Like Bill Moseley, I guess...)

When I first watched 2001 Maniacs, I didn't know who Lin Shaye was. You see these faces and it drives you crazy because you can't put a name to it. That's what it was like. Now, I'd like to go back and watch them again to really appreciate her performances... 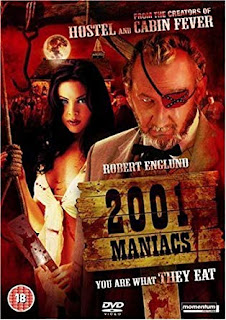 Me: That can be arranged!

There's no denying that Lin Shaye is a tremendous actor who somehow seems to make the actors around her seem better, just for acting with her. What is it about Shaye's performances in these movies that stand out for you?

Jay: Her performance is believable. It's solid, all the way through the series. Consistent. You don't have to worry that her performance is going to vary from role to role, she always gives her all.

Me: Okay, I guess this is where we wrap it up so we can start the agonising process of picking tomorrow's Best Horror Actor. Is there anything else you want to add?

Jay: No, not really. This was an easy choice. Lin Shaye hasn't always been appreciated but she's always been talented. It was an obvious choice.