Although... Shatner did do a pretty wild horror movie. What was that thing called? The one with the  melting faces?

Me: That's right. That's why the Michael Myers mask is so creepy. The Kirk mask they used for it was actually made for Devil's Rain - and that's totally not important right now. Sorry.

Jay: One of Britain's greatest ham actors. I mean... they don't get much hammier than Donald Pleasence. I can't think of anyone hammier... 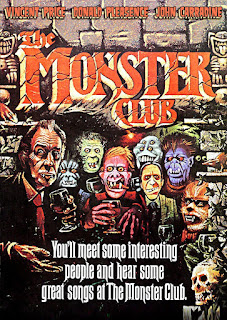 Me: I think the perfect example of that is The Monster Club from 1981. When he becomes a vampire... so hammy.

Jay: The bit where they bump the gate as they're removing the body is comedy gold. It's the highlight of the film for me.

The Monster Club had an amazing cast. To have Donald Pleasence alongside Vincent Price, John Carradine, Britt Ekland, and Stuart Whittman together in one film is genius.

Me: I do love the portmanteau movies (anthology movies, with several different stories) - but then I'm a short story writer, so I guess that's just my jam.

I suppose before we get started on any of Pleasence's other films, we'd better have a look at his performance as Dr. Loomis. Wanna start?

Jay: It's funny... when you look at the pedigree of Donald Pleasence - he was a Bond villain, for Pete's sake - his defining role was Dr. Loomis. Let's not forget he only got the role because Christopher Lee and Peter Cushing turned it down.

Me: Do you think the movie would be different if either of them had gotten the role?

Jay: Oh, God, yeah. One of the things that made Halloween work was how over the top Pleasence played the role. He really didn't seem afraid to throw himself into any role. Pleasence played Loomis right up until to his death - after, actually, since they used his voice in Halloween H20).

If you see Donald Pleasence in a movie, it's usually a fun one. He brought a sense of mischief to any role he played.

Me: Donald Pleasence has a whopping 234 acting credits on IMDb. Taking The Monster Club and the Halloween movies off the list, which Pleasence movie is your favourite and why?

Jay: It has to be Prince of Darkness. He's so believable as the priest who is forced to confess that the church had this secret they were keeping from the world. At the end, he's kind of the hero - but, at the same time, he's the villain because he's the one who ruins the movie's love story. 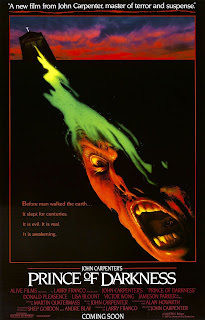 Me: I quite like Prince of Darkness. It still creeps me out. On a less creepy note, though, Donald Pleasence made a pretty memorable guest appearance in one of my favourite television shows.

We watch a lot of Columbo reruns. Tell me what you think about "Any Old Port in a Storm", in which Donald Pleasence plays wine snob, Adrian Carsini, who bumps his brother off when he threatens to sell their vineyard.

Jay: It's Donald Pleasence playing to his strengths. If you need someone to play a pompous snob, you can't go wrong with Pleasence. He just had that look. And his voice... that voice was so distinctive, but also subtle. You see this when Columbo sells him his own corked wine and he gets outraged. You really believe him because I think we've all known people like that.

Jay: Gotta be his voice. Donald Pleasence had an incredibly distinctive voice.

Me: For me, it's that perpetually pissed off expression he always wore. He always looked like a grumpy bastard. I can identify with that.