Me: Today, We're going to be talking about Ingrid Pitt and I'm going to let you start since she was one of the big Hammer actors. Have at it.

Me: I think you've met Ingrid once or twice. What can you tell me about meeting her? 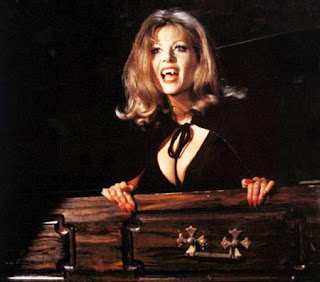 Jay: She was always lovely to meet. Totally bat shit. At one convention, I asked her to sign a rather risque photo and, after she did, I cracked a joke about taking it to the toilet. She was furious - until I explained that I wasn't going to wipe my ass with it. Once she knew that I intended to use it as a... shall we say masturbatory aid, she was fine. Totally fine with me having a wank over her. Like I said, bat shit.

Me: Ingrid Pitt was Polish, right? Did I see somewhere that she was in a concentration camp during the war?

Jay: That's right. Ingrid and her mother escaped eventually and hid out in the forest until after the war ended.

Me: It makes me wonder if it was difficult for her to make movies about the war, having lived through it?

Me: I'm dying to get into Ingrid's movies but I feel like we should probably touch on Doctor Who before we move on since we're both Whovians (different generations, of course.)

Me: Does it say anything that the two stories Ingrid Pitt was part of were both just terrible?

Jay: Not at all. She was just unlucky. You know as well as I do that Doctor Who was plagued, all the way through, with the odd dud. It just so happened that hers were both duds. Her performances in those were good enough.

Me: It seems like Ingrid Pitt was everywhere for a long time but, in reality, she only has 41 acting credits. That's not very much, compared to some of the other names on this list. How did she dominate the screens, having done so little?

Jay: There's just something that hits the right spot with an audience. It's like Barbara Windsor or James Dean - they became icons without ever really having done much. Ingrid Pitt is like that. She's the iconic lusty vampire.

Me: I know The Vampire Lovers and The House That Dripped Blood so I totally get why she's that iconic vampire but my favourite Pitt movie will always be The Wicker Man. We tend to get carried away when we talk about that one so let's just focus on Ingrid's performance. 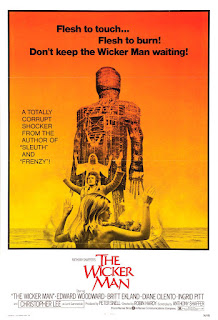 Jay: It was a small role, really. She was one of the three main women in The Wicker Man: Ingrid Pitt, Diane Cilento, and Britt Ekland. Again, with the nudity. The scene in the bathtub borders on gratuitous.

She was brilliant in The Wicker Man. I love her obstinance and cheek.

Jay: That's just Ingrid. She had a wicked sense of humor and was always full of fun. I can't believe she's been gone almost ten years.

Before we wrap things up, I suppose I'd better ask you why Ingrid Pitt is on our list of Best Horror Actors.

Jay: Well, by rights, Ingrid Pitt probably shouldn't be. There are loads of actors who have done a lot more. But you can't ignore her role as an icon. Ingrid kind of lived the role as well. She used to organize trips to Romania where she would be your host. I think she did those right up to the end.

It was a shock when Ingrid died. I'd just seen her at a convention that year. I know she was in her seventies when she died but she was in fine fettle.

Me: I guess the thing that surprised me about seeing Ingrid Pitt that year was that she still had quite a strong accent.

Me: An image everyone knows, one that's totally iconic of Seventies horror.