Jay and I struggled for something to watch last night. The movie we started to watch (The Happening), we quickly realized we'd seen before. The next movie we started (Take Shelter), was just way too slow to keep either of us interested. We finally settled on Flight 7500.

A horror movie set entirely on a plane is no easy thing to pull off. Flight 7500 does it incredibly well. All eyes on the creepy guy that dies suddenly and you won't pay attention to the real tragedy: a broken seal that causes a major drop in cabin pressure. The whole movie is a red herring, which makes for dropped jaws at the end. 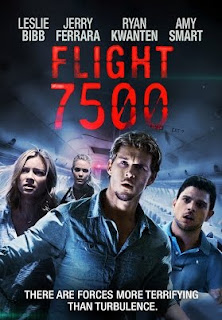 Flight 7500 is surprisingly atmospheric, considering the setting, and is full of jumps. If you're afraid of planes, like me, there's another level of "Holy crap!" too. The characters are rounded, believable, and often infuriating (by design.) The "point" is spelled out a little but not in a way that feels condescending and, even though it's a horrible ending, you kind of feel good about it.

The hubs and I can't agree on this one. I loved it. He felt like the pay-off was stolen from him. Give it a try and let me know what you think.
Posted by Wondra at 21:18