The Taking of Deborah Logan is one of those mockumentary films that makes you rely on the person holding the camera who, of course, is almost never where they ought to be when they ought to be there. Jay decided almost as soon as the movie started that he wasn't going to enjoy it because he hates found footage/mockumentary movies. By the end, though, he was willing to concede that it "wasn't bad."


In The Taking of Deborah Logan, a film team lead by Mia Medina follows Alzheimer's victim, Deborah Logan, and her daughter, Sarah. Deborah's disease develops at an alarming rate and it's soon obvious that it's not just Alzheimer's working its evil on the old woman. 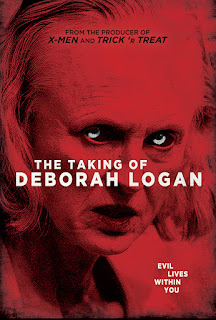 As far as twists and turns and surprises go, The Taking of Deborah Logan is completely predictable. It moves at a slow pace, too, which gives you plenty of time to think, 'Hey. I bet that one's up to no good.' Nothing shocking or original, I'm sorry to say, but there are some good jumps, which always redeems a slow film.

I think Jay enjoyed this one more than I did. Usually, I like this style of film but this one was just too slow for me. It was a clever idea and it was certainly nasty in places, but I doubt I'd bother watching it again. As the man said, The Taking of Deborah Logan wasn't bad - but it wasn't great, either
Posted by Wondra at 11:29