Jay and I sat down to watch Silent House last night. After about ten minutes, we gave each other "that look". You know that look, right? That are-we-really-gonna-sit-through-this-shit look. But, we stuck with it. Was that the right thing to do?


Silent House is about a young woman, Sarah, who's helping her father and uncle remodel a family vacation home so that they can sell it on. Most of the windows have been broken by local yobs so they're all boarded up, which gives the movie a dark, claustrophobic feel.

Sarah's uncle has to leave. Very soon after, her father gets attacked by a mysterious stranger and Sarah is stuck in the house with her father's assailant. When she finally escapes, Sarah runs into her uncle, who drags her back to the house to find her father. Even weirder stuff happens when they return. Stuff that can't be real... 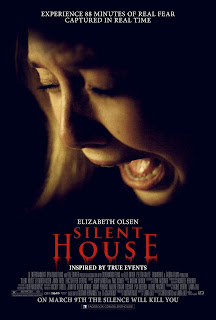 I couldn't stand the camera angles used in Silent House. Made me want to freaking scream. I don't want to see the back of this chick's head or her left foot, okay? I want to see the freaking action.

Don't get me wrong. I understand why it was done that way. It's a visual way of creating an unreliable narrator. I'm a writer; I get it. But I don't have to like it.

(By the way, Jay called this style Cleavage Vision. Nice to see he was paying attention to the action... Lol.) 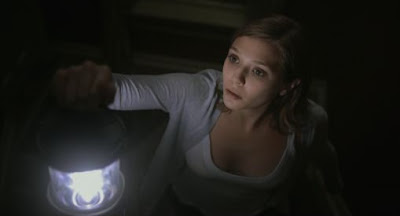 Thirty minutes into the movie, I turned to Jay and said, "If this turns out to be all in her head because Daddy and Uncle interfered with her as a child, I'm going to be so pissed off."

What I will say for the creators of Silent House is that they utilised foreshadowing and symbolism extremely well. They set it up perfectly for the reveal. It was an extremely sensitive topic and they dealt with it tastefully. I'll give them credit for that.