Our movie choice for last night was Intruders (2015), which we watched on Amazon Prime. Intruders is a horror movie about a woman, Anna, who looses her terminally ill brother but is unable to attend his funeral due to crippling agorophobia. The three men who invade her home are unfamiliar with her mental illness and she catches them by surprise when they break in.

What do you do if you're faced with home invaders but can't leave the house? Fight back, of course.

Intruders does a very good job building tension. It's not jump-out-of-your seat scary, but it is suspenseful - especially when you start to realize agoraphobia is only the start of Anna's problems.


The twist is fairly easy to spot, if you're paying attention, but that doesn't make it any less enjoyable. Personally, I was 100% behind Anna and her recently deceased brother, rather than the intruders who become the movie's victims very quickly.

The movie's underrated character is Dan the delivery boy, played by Rory Culkin (yes, Macaulay Culkin's brother). I was a little disappointed that he wussed out and ran for his life. The relationship between Dan and Anna - and the potential for some really crazy shit - would have made for an interesting sequel. 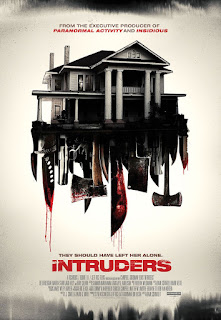 I enjoyed Intruders but the ending spoiled it for me. It just didn't make sense. Agoraphobia isn't something you just get over. Less than a day after peeing herself because she was thrown on the porch, Anna just strolls out like nothing's wrong? Doesn't happen that way.

Also, I'm still struggling to understand the whole burning-the-place down thing. A house that she hasn't left in more than a decade, she lights on fire and walks away. Why? WHY?!

If not for the end, Intruders would have been a very good movie. Because of the end, it's just okay.
Posted by Wondra at 18:00