There's only one movie that can begin our 31 Days of Horror marathon and that movie is Dracula. I'm not saying that because I'm obsessed with vampires. (I am, of course, but that's beside the point.) Universal's Dracula is the horror movie. Let's talk to Jay about why it made Castle Vanian's 31 Days of Horror list... 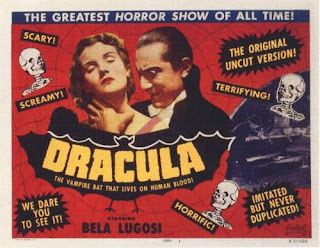 I remember talking to my nan about Dracula. She told me that, when it came out, it was terrifying. She remembered people fainting in the cinemas when she watched it.

When I was about 7 or 8, I made my grandfather stay up late so that I could watch the old Universal monster films. They would do double-features, with a Universal film followed by a Hammer film - one of them, of course, being Dracula.

You could argue that all of Universal's monster movies deserve to be on this list but Dracula is the one we just couldn't cut. It's brooding, atmospheric, and compelling. And, let's face it, Dracula is one cool motherfucker, right?

Yeah, I am obsessed with vampires. So are a lot of people. Why? Because they're slick. They're cool. Look at how many vampire films there are out there now - and they all stem from Dracula. That suave, sophisticated vampire people love starts with Bela.

Did you know that Bela couldn't speak English when they started filming Dracula? He had to have all his lines spelled out phonetically, which is what makes him sound so foreign. It's kind of lucky that it worked out that way, though, isn't it? Think about it. When you hear children on a playground doing Dracula imitations, it's Bela's stilted, over-enunciated voice you hear. It's memorable and perfect for the character. 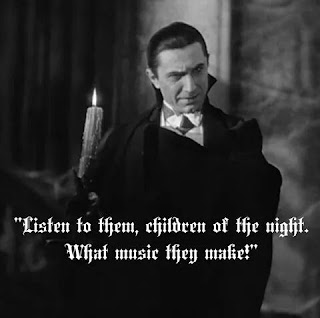 I have to say that, even though Bela nailed the dashing foreigner bit, it was Dwight Frye's Renfield that stole the show. His portrayal of the mad estate agent is spot on. Those are some cuh-razy eyes!

I agree. Dwight Frye's performance is the best in the movie. He did a brilliant job of portraying bat-shit crazy. My favourite part of the movie, though, is when Van Helsing confronts Dracula after seeing his lack of reflection in the mirror.

There you have it, the first movie on our list of classic horror. If you haven't seen Dracula yet, you have to, just to see where it all began.
Posted by Wondra at 10:00