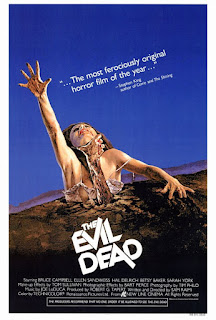 It's hard to imagine anyone who hasn't seen The Evil Dead - and even harder to describe it to those people in a way that would make them want to watch it. I'll give it a try, though.

A group of friends fight for their lives when they accidentally unleash a horde of demons.

Some kids read a book they find in a cabin and accidentally summon a demon.

Yeah... The Evil Dead is so, so much crazier than it sounds. 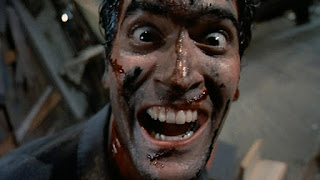 It really is. Stephen King described 'The Evil Dead' as the most ferociously original horror film. From about twenty minutes in, it's an assault on the senses. There are, seriously, gallons of blood.

'The Evil Dead' is a student project that literally revolutionised the horror genre. I had never seen horror like that. It's an incredibly visceral film. When Cheryl changes and drops to the floor and you see her hand moving... You can imagine it, you can feel it. You know what it's like to accidentally jab yourself so to have a pencil buried in your flesh.It's horrific.

I guess it's a different kind of gore. Or, a different age of gore? Gore in 1981 was definitely different than it is today. I'll take The Evil Dead gore over Saw gore, any day. We have better effects now and, in general, a better knowledge of the human body so it's only natural that gore has evolved too. Of course, that doesn't make The Evil Dead any less effective. 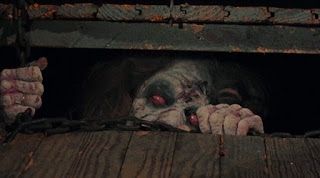 'The Evil Dead' was a strange film because it came out on video before it came out in the cinemas. That should give you an indication of how popular it was.

It was down to word of mouth. People in school were talking about this film they'd seen called 'The Evil Dead' and it scared the shit out of them. When they finally had it at our local video store, we had to book it because it was much in demand. I think we finally got it on a Wednesday or Thursday afternoon and piled down to my friend's house to watch it.

The room was full of eight teenage boys so you know we were buggering about and generally being assholes. You always knew that a film was good if the room went quite and we started watching. For the first ten minutes or so of 'The Evil Dead', we were pretty rowdy. But, once they get to the cabin, we really started paying attention. 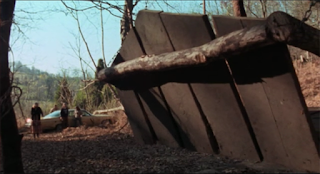 It really grabs your attention, doesn't it? It's such a simple technique but when that swing stops on its own, all the hairs on the back of your neck stand up. Bad shit's about to go down.

You knew it was bad because a couple of the boys went home. Funny how they could hear their mums calling them home for their tea...

Hah. It certainly has jumpy bits.

But Raimi is a bastard for not going for the obvious jump. You expect the scare to come from one place but it always comes from another.

The bit that always gets me is when Linda starts singing. I'd never seen anything like it. She's sitting there with these white eyes, telling you that she's going to kill you. That's scary shit.

That bit always got me too! It's really creepy, that sing-song voice combined with pure homicidal malice. Terrifying. The other part that bothered me, especially as a kid, was the bit with the tree...

Absolutely. I played a lot in the forest so the idea of the trees grabbing a hold of you was terrifying. Raimi was clever there because he didn't show the creature. Instead, it showed the demon's point of view instead.

It was worse than that for me, being a girl. I was too young, really, to understand the concept of rape when I first watched it so seeing a girl being invaded - and by nature at that - was beyond words. It still bothers me, actually. But, anyway... 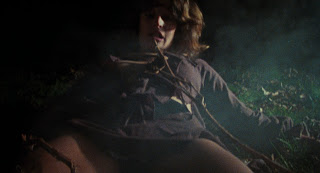 Because The Evil Dead was a student film, took a long time to finish. Three years, I think.

That's right. And they couldn't always get the same actresses so sometimes you see a random woman they picked up at the bar in a really bad wig.

But you don't really notice because the movie is so good. I never noticed, anyway, until it was pointed out to me.

You know, it's really not that well acted. The effects, by today's standards - even eighties standards, actually - are hokey but it didn't detract from the effectiveness, the tension, the sheer fucking terror of the film.

So, it had everything working against it but still ended up being a masterpiece of the horror genre?

'The Evil Dead' was one of the movies banned in the UK. The whole video nasty thing was a joke anyway; just the government trying to find another way of controlling you. There were worse films out there but this one went mainstream, which made it more threatening to the government. 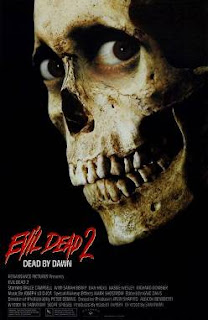 The Evil Dead 2 fixed that, I guess. It was basically the exact same movie, with all the horror removed. How pointless.


Don't even talk to me about that movie. I hate, hate, hated it. The series, 'Ash vs the Evil Dead', which is still gory but has that humorous element that comes from 'The Evil Dead 2' and Ra'mi's determination never to make anything as scary as The Evil Dead again. Talk about biting the hand that feeds you.

'Army of Darkness' (Or, 'Medieval Dead' - which I thought was the better title.) Again, you've got comedy with scares. I didn't realise that there were different endings. For awhile, I only ever saw the one ending. Then, when I finally did see the other ending, that was the only one I saw for ages. I prefer the ending where he's overslept. I guess that's the nihilist in me. Or, because it's just that it's the one I saw first.

The ending where Ash oversleeps is the first one I saw too. I think that's my favourite.

Can we both agree that the recent remake of The Evil Dead sucks balls?

Yes, yes we can. Don't bother is about the best thing I can say.

That's enough from us for the day. See you tomorrow? Don't forget to leave a comment before you go.
Posted by Wondra at 10:00