Jay and I have spent a lot of time talking about the movies on our 31 Days of Classic Horror list over the past month or so. When we came back to An American Werewolf in London (1981), we almost changed our minds. For about the fifth time.

Well, to be honest, I thought 'An American Werewolf in Paris' was made in the 2000s, which would have put it past our cut-off date, which was one of the main reasons we picked 'London' over 'Paris'.

We knew that we would choose one of the American films over all the other werewolf films that made it to our shortlist. There weren't as many as you'd expect, strangely. Wolf came pretty close to making the list but, as good as it was, it fell just short of being a classic.

The thing that made 'American Werewolf in London' stand out so much was the transformation scene. It was only about a year before 'The Howling', which also had an amazing transformation scene - but they were very different, one American and one British. Both very good films, of course, for different reasons but 'American Werewolf in London' was the better of the two.

I love the transformation scene! There's something kind of ironic about the juxtaposition of the cheesy romance song playing over David's anguish that made the moment even more enjoyable. Man, that looked like a painful transition.

It certainly was a groundbreaking transformation. But you don't see the werewolf itself much; they leave it to your own imagination, which is where horror lives. That moment you do see the wolf, in the Underground, is well worth the wait. 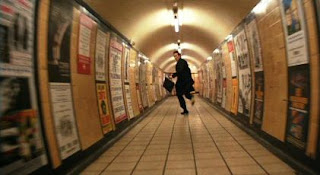 That's a great scene. I like it for the camera angle, though. It really makes you feel like you're running with that poor schmuck...

There was a huge gap between runs of werewolf films. 'American Werewolf in London' came in the glut that followed. My friends watched it on video in about 1982. Luckily, no one paid much attention to the ratings on videos in those days...

Seems like there was so much more horror coming out in the Eighties. Or, maybe it was just more mainstream at the time? Of course, it could just be that all the best horror movies were made in the Eighties, while their remakes are being made now and totally stinking up the genre.

Well, there is that. Not that it applies to 'An American Werewolf in Paris', which was an excellent film in its own right. 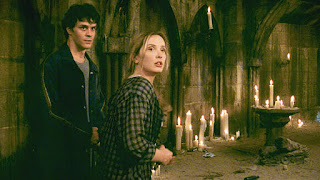 It's not really a remake, I think. I wouldn't call it a reboot, either though. I think it's more of a... continuation. Same world, different characters. If An American Werewolf in Moscow came out tomorrow, I'd be there to see it.

Back to London, though...

It's kind of surreal and strange, isn't it? Especially when his friend is talking to him.

Yes, and them. Very strange.

An American Werewolf in Paris does a better job of explaining that. London just lets the weird shit happen and expects you to understand why. In Paris, they tell you that it's part of the change, which makes the movie flow better.

One of the things that both movies have in common, which is pretty uncommon as far as werewolf films go, is the whole undead victims thing. It's so clever that the victims of werewolf killings can't pass on until the last werewolf in the line dies. I don't remember ever seeing or reading that anywhere else. 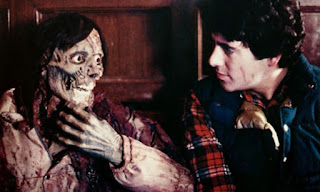 I do love the casual way that the werewolves victims introduce themselves to David. How surreal (which is probably the best way to describe the movie.) I think my favourite comedic bit, though, is when he wakes up in the wolf enclosure. You don't want to think too much about that one!

Definitely my favourite part. It's hilarious that he has to find his way home, stark bollock naked. And snatching the kid's balloons...

That's one of the really great things about An American Werewolf in London, the comedy. It's absolutely laugh out loud stuff. But, it's also really sad. I'd forgotten what happened to David at the end until I watched it again the other day. The feels.

When I was talking about the cameo earlier, I forgot to mention my favourite cameo in the movie, Rik Mayall. Did you notice him at The Slaughtered Lamb? 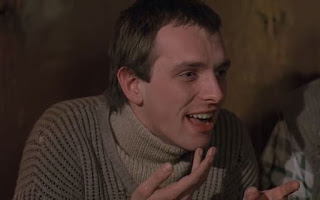 You get those weird locals in horror a lot. But you know... when you go into the villages, they are a little strange. A little off. They don't mean to be, they just don't live like the rest of us. It's creepy but also very familiar.

You say "them" like you've never entered a weird ass pub in the valleys and heard, "Where you from, butt?"

Finally, did you know that 'An American Werewolf in London' lead to Michael Jackson's "Thriller", which remains one of the most recognisable music videos ever?


You can totally see that, too. There are definitely hints of the transformation scene evident in the music video.

Thanks for stopping by, folks. Come back tomorrow for another great movie. See you then.
Posted by Wondra at 10:00