Welcome to Day 20 of our 31 Days of Classic Horror countdown. Today, we're going to be discussing Zombie Flesh Eaters (1979). 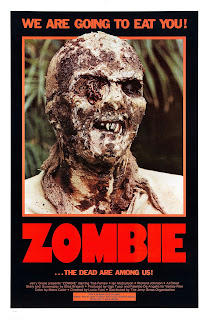 Zombie Flesh Eaters (aka: Zombi 2) is a Fulci film in which a young woman (Tisa Farrow's Anne Bowles) goes looking for her missing father and ends up on a tropical island full of zombies. Since it's one of Jay's favourite movies, I'm going to let him get us started.

In 1981, we had just joined the very first video store in the area. The first two videos my father brought home were 'Alien' and 'Zombie Flesh Eaters'. 'Alien' was okay but 'Zombie Flesh Eaters' was immense. I'd seen 'Dawn of the 'Dead', 'Night of the Living Dead', 'Plague of the Zombies', and 'I Walked With a Zombie' so I knew zombie films. This was something different.

As a youngster, watching 'Zombie Flesh Eaters' on Saturday night, it was the first time I realised how much zombies actually frightened me. It kick-started my love of zombies in a big way. You have to remember that the British version of the Romero movies were cut by about thirty minutes, which made them very tame.

I can't believe the government had so much control over what you were allowed to watch here. The UK censors aren't so bad now but it sound like they were a real piece of work back then.

Yes, 'Zombie Flesh Eaters' was one of the original video nasties - and I understand why. It was visceral, with maggots crawling out of eyes, flesh falling off, and the noise they made as they struggled to breathe.

The gore effects were outstanding. Savini had shocked in 'Dawn of the Dead' but nothing to what Fulci did - especially with the eyes. The bit where Mrs. Menard has a shard of wood driven through her eye was brutal. It was one of the most outrageous scenes in any  in zombie film, when Susan gets attacked by shark, then attacked by zombie, then zombie gets attacked by zombie. Stupid, but brilliant.

That boat scene was not kind to poor Ian McCulloch, who had a really bad comb-over that just didn't stay put.

The production company wanted him to look young. At that time, you just couldn't have a dashing hero without any hair. The comb-over wasn't good.

One of the other things that bothered me about the movie was the fact that it was dubbed when it really didn't need to be.

Yes, it was dubbed in parts. A lot of the cast was Italian so, even though they could speak some English, the accents were very heavy. The girls, though, spoke very little English so it was even more necessary for them.

The acting was very good, with the exception of Tisa Farrow. She only did a couple of films, which was wise. The girl had two expressions, misty-eyed and stoned. Basically, she was living off her sister's name.

I heard that Fulci hated women. Is that true?

He was a bully with women. He would shout at them and call them stupid. McCulloch admitted that, although Fulci was never that way with him, he could be a nightmare.

They did a lot of guerrilla filming. They were only allowed into the country on the proviso that they didn't work. The police officers that you see are actual off-duty police officers. The news office where he's working is actually one of Rupert Murdoch's offices and a janitor had gotten them in. They were very good at working with what they had. Or, rather, could get.

The one thing they never skimped on was the makeup. It's hard to believe these Italian makeup artists were better than Savini's zombies but they were. The Romero zombies at this point weren't that scary but Fulci's were terrifying. Yes, they were still slow but the make-up was so much better.

I find both Dawn and Zombie awfully dated, from the fashion to the film quality. That being said, both are still very good to watch.

That's all for today. Come back tomorrow for more!
Posted by Wondra at 10:00