Welcome back to 31 Days of Horror on Wondra's World. There was some dispute over whether the next movie should be included on our list - whether it was more action/adventure than horror. The decision was made after this short conversation:

Jay: Jaws isn't really a horror movie.
Me: Did you ever go on the Jaws ride at Universal Studios?
Jay: No.
Me: Well, I did and it scared the shit out of me. Jaws stays.

Hard to argue with that logic, right? 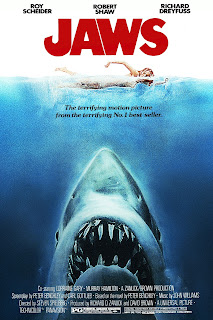 Jaws (1975) is about a small coastal town that's struck by a series of bizarre shark attacks. The town's new police chief, Roy Scheider's Chief Martin Brody, tries desperately to keep people safe while the town's politicians fight him at every turn. Eventually, he joins a small team of intrepid - and possibly crazy - men (a marine biologist and a kooky old sailor) who go to sea to take the shark on.

Now that you've got the basics, let's go to Jay and see what he thinks.

I saw 'Jaws 2' before I saw 'Jaws'. I eventually saw them both on a double bill. My dad wouldn't take me to see 'Jaws' when it came out because he thought it would be too scary for me. He was probably right - I was about 6 at the time and Dr Who still frightened me. 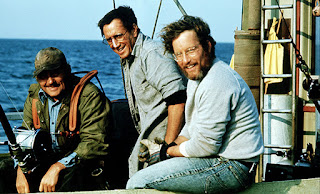 I nagged to go see 'Jaws 2' when it came out. I went with my family and best friend. My dad and my best friend both knew about the bit where the shark bites the boat so it was a great laugh for them. My mom and I just about took off.

You know, that's the part of the Jaws ride that nearly gave me a heart attack. I was about eleven or twelve when we went and a helluva lot cuter than I am now. The guy running the ride was clearly evil because he directed me toward the "best seat on the boat", which was exactly where he knew the shark would bite. Bastard. 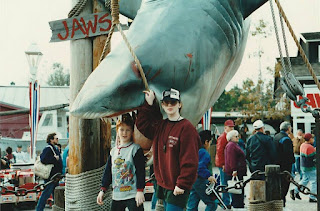 I said I was cute. I never said I had fashion sense.

Hah. That's exactly the kind of thing I would have done. Of course the shark frightened me, too. I was about ten-years-old. The power of 'Jaws' was that it stopped people from going into the sea for a season. Peter Benchley, the guy who wrote 'Jaws', said that he wished he'd never written it, because of the long-term damage it did to the shark community. They should never try to remake it for that reason. The shark populations have never recovered from the fallout of this movie.

On one hand, that's utterly heartbreaking. It's hard to imagine a whole species of animals being impacted by the fear created by a piece of fiction. On the other hand, it's a testament to the effectiveness of Jaws as a horror film. That it could be so powerful. Incredible. Horrible, but incredible. 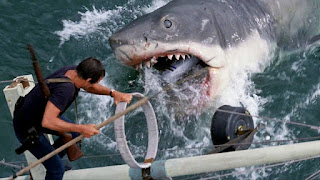 Exactly. And that's just part of the reason 'Jaws' is still as relevant today as it was back in '75. It doesn't really date, you know. Because it's set mainly on a boat - or on one of those quaint coastal towns that are always a little out of touch with modern times - it doesn't date. Yeah, the effects are a bit hokey with the shark but they don't show it much so it still works really well.

I wouldn't say that it's a horror, though, really. 'Jaws' is more of a good action/adventure film with lots of jumps and scares. It's also believable. There's nothing fictitious about the deadly power of a great white; it is a prolific man-killer. That just added fuel to the shark hysteria. As a movie, though, there's no part that didn't work for me. You've got a helluva cast, for starters. 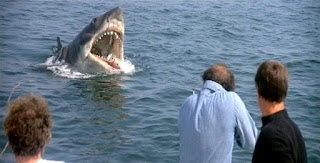 Like a booze-soaked Captain Ahab? Hah. I like Richard Dreyfuss's Matt Hooper; the frustration of the young scholar who could save everyone if anyone would just fucking listen. That appeals to me. And the sarcasm, of course. That "Ha ha, they're all gonna die" moment. I also love the bit on the boat, where Quint and Hooper are comparing battle scars. It's followed by a beautifully dark moment that raises the hairs on the back of your neck. It's hard to balance humour and tragedy, but Jaws does it well.

Best not forget the theme. It's one of the most iconic theme tunes in the world. They use it in all the Jaws movies. It's menacing and foreboding, telling you something's coming - and it's instantly recognisable. Every schoolkid knows that sound, even if they've never seen the movie. That's a score that works.

Agreed. There's another piece of brilliance happening in Jaws, you know. The fact that Chief Brody isn't from Amity Island is important to the story. Coming from a small town, I can tell you that, no matter how long you've lived there, you'll be an outsider until your children have children. (And maybe even after that.) Small town mentality, man. And that's part of the reason no one will give Brody the permission he needs to close the beaches. What does this guy know, right? I mean... he's not even from here. (Well, that and good, old-fashioned greed.) I don't care what position you hold, no one is going to trust an outsider which, as Jaws shows, can have disastrous consequences. 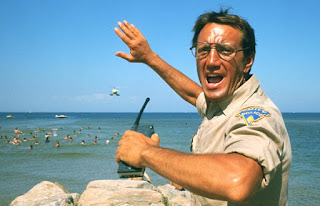 'Jaws 2' was actually pretty good. You had a lot of the original cast back. Robert Shaw's character was dead and Dreyfuss didn't return but they're both mentioned, which is a nice touch. There's a nice nod to the original at the beginning, when the shark passes over the Orca at the bottom of the sea. Forget about the other sequels; they're absolute rubbish.

You mean like Jaws: The Revenge? This time it's personal. *snort* Yeah... rubbish is a good word.

I think it's just about time we wrapped things up here... Do you agree that Jaws is horror? Get in touch and let us know what you think.
Posted by Wondra at 10:00