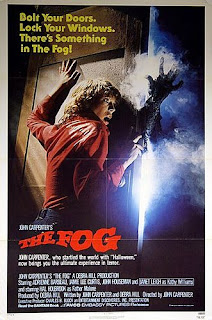 The Fog is, essentially, a tale of revenge. It's about a coastal town called Antonio Bay that, you learn, is built on blood money. The town's 100th anniversary has arrived and the lepers that were murdered to fund it are a little pissed off.

I love revenge stories because you're never really sure who you want to root for. You've got character development going on to make you care about these people, the baddies showing up to take them out, and then the truth. Their ancestors did a terrible thing - and got away with it. Shouldn't the betrayed lepers get their chance at vengeance? Revenge adds a delicious layer of psychological conflict to a movie. 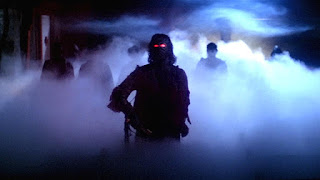 Let's take a break from my rambling to see what Jay has to say.

I first watched 'The Fog' on video when I was about twelve or thirteen. It was one of those films we'd gone up to the video store as a group to get. I remember the guy working behind the counter was our age. Times were different.

From the opening scene, you knew you were in for something quite creepy. Just the music and the feel of the film. That campfire tale. The ghost story about what happened to the ship, the way the crew was duped. It's a great way to start the film.

I love starting a horror movie with scary stories being told around a campfire. The thing that I really love about the beginning of The Fog, though, is the radio voice over. It's a good move, using the voice over from Stevie Wayne before you see her, as you're given a brief tour of the town, because it makes her feel familiar before she ever steps on screen. It's also clever because, at the same time, you're seeing all these crazy things happening in the middle of the night, with almost no one around to see them.

Before we get into all the things we love about The Fog, though, we should probably talk about the film's age. Whoa, 1980. Those moustaches, man. Those lapels! No matter how good a film is, fashion and beauty will always date it. There are a couple of other things that date it, things that really made me go, "WTF!" WTF Moment Number 1. Picking up a hitchhiker then sleeping with her. WTF Moment Number 2. Tom Atkins's Nick is drinking a beer while driving. Yikes!

I swear, if you keep making lists, I'm revoking your keyboard privileges.

Okay, then. It was lovely to see Janet Leigh and Jamie Lee Curtis together.

Right! You can't beat Jamie Lee Curtis and Janet Leigh in the same movie. They are THE scream queens. They don't interact much during the movie, do they? Which reminds me...

It's actually a large cast but it feels intimate because they don't cram everyone on screen together, all the time. Mostly, you see them in twos and threes. When here are more people than that on the screen, it's during scenes that are meant to feel busy and frantic, like in the church. The Fog does a really good job here. Too many horror films either try to squeeze everyone on the screen at the same time or they completely forget about characters until they're needed. The Fog knits everyone's lives together brilliantly.

It's difficult to say whose performance was best but I think it has to go to Adrienne Barbeau. She's the linchpin of the film, in a lot of ways. Plus, that husky voice and those large breasts... sexy as fuck.

I'm not even sorry. It's true.

I also love Hal Holbrok as Father Malone. He was a great character actor. (You know, the one in "The Crate" in 'Creepshow'.) He tries to tell everyone the truth, that the heroes are the killers but everyone dismisses him as a drunk. And, he provides such a brilliant twist at the end. Father Malone gives back the gold, the blood money. But the gold was never going to be enough. They, rightfully, wanted revenge.

The Fog is brilliantly filmed. Shapes in the fog are incredibly foreboding. Just the way the fog moves is sinister as fuck. You can't deny the brilliance in using fog as the baddie. A force of nature that has been turned into a tool by an outside hand. The fog itself, the speed that it moves and the fact that it's often lit or glowing, is scary enough but then you get the creatures inside.

When they first put 'The Fog' together, it didn't work. It just wasn't scary. They had to go back and fix it. A lot of effects were added, especially gore. Thank god they did. The thing that makes 'The Fog' is the fog itself, the way it was lit so that it had a luminosity in the film.

I preferred not seeing the... er... ghosts? zombies? at the end. I think the gore cheapens it a bit. The dark silhouettes work better. They're terrifying; a dark silhouette against the frosted glass... the steady knocking of the hook against the door... on the phone, talking about the fog and you see it sweep past the window... the power goes out... that steady knocking on the door again, accompanied by fog creeping in under the door. Much better than green flesh and maggots. 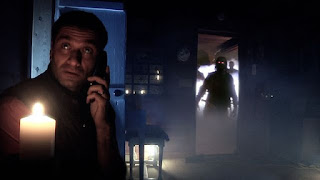 The fact that they don't show the ghosts much does help the film. They're rotted, decayed. Putrid. Come on, they've been in the water for a hundred years. You've gotta have the gore.

Is it called a sting, that sudden blast of noise when something freaky happens? It works, especially on the fake-outs. You know, when the locker door you've been watching the last five minutes falls open but there's nothing inside - because the dead body is behind you and falls on you instead? 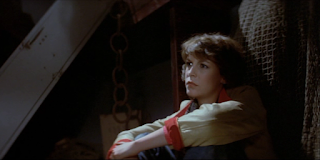 'The Fog' was scored by Carpenter when he was at the height of his musical creation. It's a creepy, creepy soundtrack. The best thing Carpenter brought to horror was uniting action and sound. Building tension with music and the stings. It's one of the reasons 'The Fog' is still one of the best ghost stories you'll ever see.

No argument from me. Do you want to talk about the remake before we wrap things up here?

I'm with you. What a horrible idea, turning The Fog into a love story. The remake failed in every way.

That's a lot nicer than anything I could have said.

I guess we're done here then. Drop a comment below to let us know what you think. Tomorrow, even more classic horror brilliance. Come back.
Posted by Wondra at 10:00